RX 6700 XT can be the Highest Clocking GPU from AMD 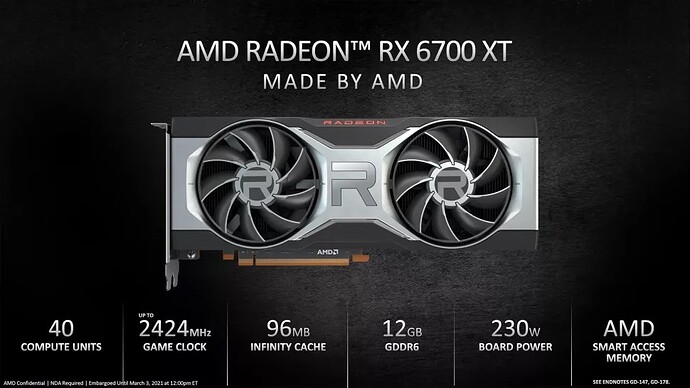 The company revealed that the new GPU will feature a game clock of 2,424 MHz. This is much higher than any of AMD’s other RDNA2 GPUs, but now, according to a Geekbench 5 benchmark, RX 6700 XT could boost much higher [asTweeted by APISAK]. In the openCL test for RX 6700XT, Geekbench identified the GPU running at a peak core frequency of 2.85 GHz, which is 17% higher than the card’s game clock. With AMD’s Navi 21 GPUs, the extra headroom available is not as high as on the 6700XT without manually increasing power limits. So theoretically, if the power delivery and cooling system on an RX 6700XT stay similar to that of an RX 6800, the RX 6700XT’s remaining cores can boost much higher. But, if the RX 6700 XT can sustain anything close to 2.85 GHz, then this will be exciting news for RDNA2 enthusiasts and RX 6700XT buyers, as AMD is letting the cores boost as high as they can within reason.