Intel’s new processors are scheduled at the end of 2020 or the start of 2021. TUM_APISAK spotted a new Rocket Lake processor in the Geekbench 5 database. The new processor is spotted with eight cores and 16 threads. This operates at 3.19 GHz base clock and 4.28 GHz boost clock. Rumors suggest that Rocket Lake might be the last of Intel’s 14nm processors. The Rocket Lake comes equipped with 512KB of L2 cache and 2MB of L3 cache per core. The main reason for the structure is that Rocket Lake features Gen12 Xe graphics, which is on a 10nm die. Intel might be sticking to the 14nm CPU die with the 10nm GPU die using the Embedded Multi-die Interconnect Bridge (EMIB). Intel probably had to cut down on Rocket Lake’s Gen12 Xe iGPU to make room for more cores. The Rocket Lake processor’s Gen12 scored 6,266 points in the Geekbench 5’s OpenCL test, while the Core i5-1035G1’s Gen11 put up 5,899 points. It’s only a mere 6.2% difference. We shouldn’t compare a desktop processor to a mobile one but Intel hasn’t launched desktop Ice Lake yet so Core i5-1035G1 is the closest chip to carry out the good comparison. 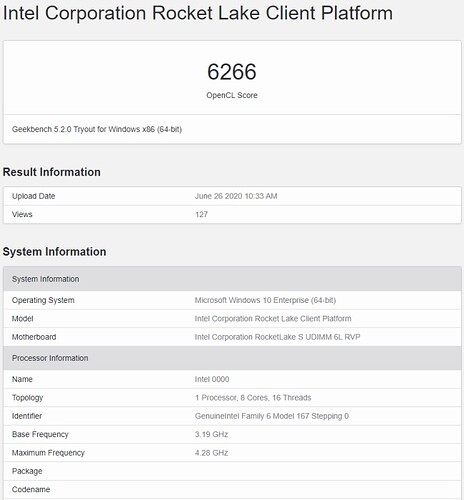 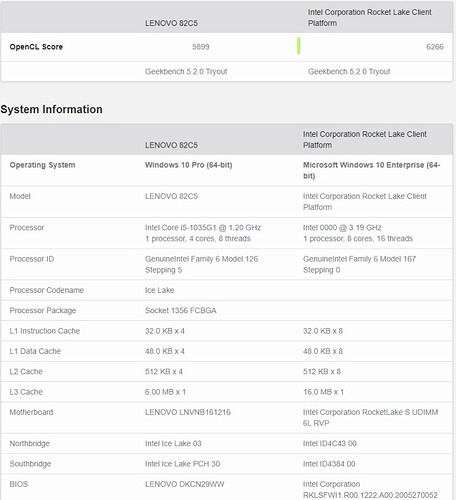