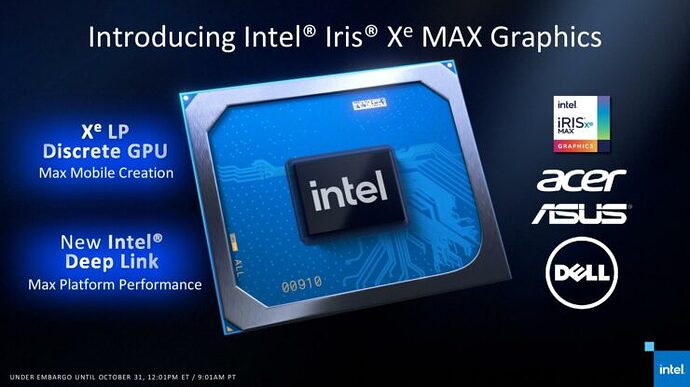 The first third party benchmarks of Intel’s newly launched Xe MAX GPU have leaked out and it is an absolute beast (considering its weight class). Not only does it completely destroy NVIDIA’s entry level MX350 but it trades blows with the MX450 (GTX 1050) and wins in most cases. The leak happened by momomo_us over at Twitter who linked to a video posted on bilibili featuring a small review of an Intel Xe GPU equipped notebook. 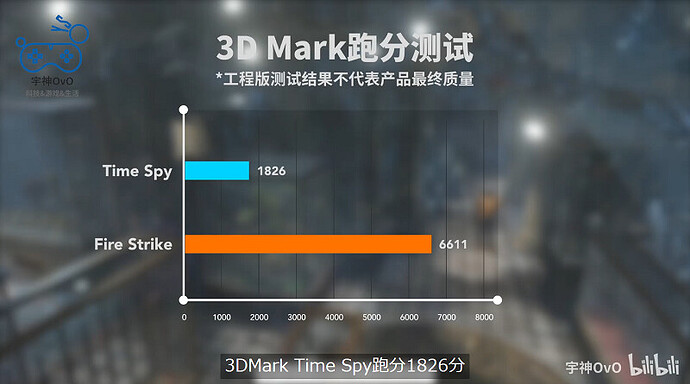 800×446 64.7 KB
Here we see that the Intel Xe MAX GPU easily beat out the NVIDIA MX450 at 1826 Time Spy points (the green part usually scores in the 1680 range) and is just slightly behind the MX450 in Fire Strike (green part scores in the 6800 range). The Xe MAX GPU is clearly a MX450 competitor and offers superior value once you consider that its AI performance beats out an RTX 2080. Depending on how Intel has been pricing this, they could use this to very quickly break into the discrete GPU market for mobility. The Intel Iris Xe MAX discrete GPU has a higher TDP envelope that can push the clock speed to 1.65GHz and also contains a dedicated 4GB memory and works over PCIe 4.0. Intel Deep Link is the name of that technology. It is a platform innovation that allows Intel to tap not only the integrated GPU and dedicated GPU together - but also the CPU itself. Compared to cross-vendor configurations (for example NVIDIA-Intel), only one device would run a specific workload. 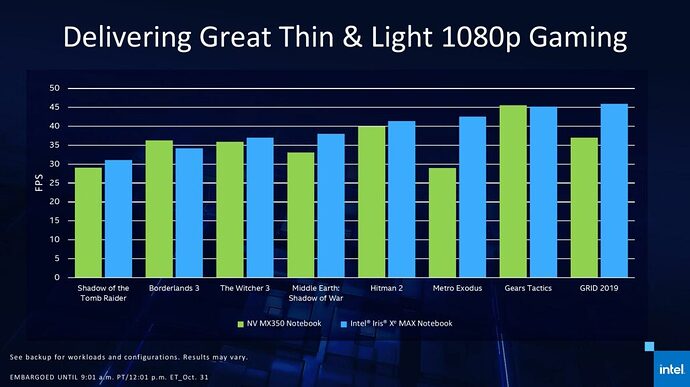 1030×579 63.6 KB
The Intel Iris Xe MAX notebook easily beats out NVIDIA’s MX350 in 8/10 scenarios given in this benchmark. However, Intel Iris Xe MAX GPU is seen to offer more consistent performance throughout the gaming tiers and absolutely destroys the MX350 in some heavy AAA titles like Metro Exodus. Since it can achieve 30+ fps on most AAA titles on low-medium setting, I would say this is the first entry-level gaming solution from Intel in years. 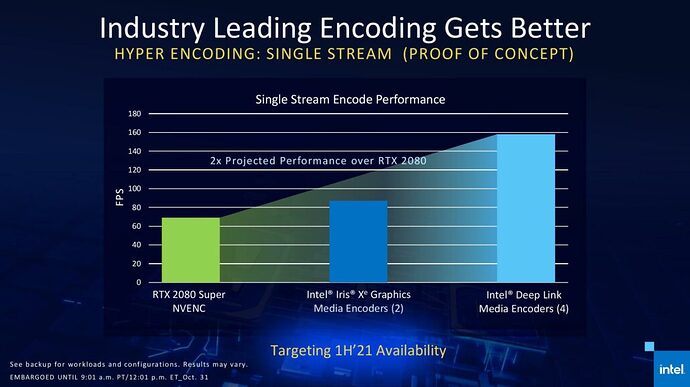 The best part is, we might actually see Deep Link enabled in some gaming applications and they are working on adding more applications to the platform. Intel® Iris® Xe MAX graphics are available for Acer Swift 3x, Asus VivoBook Flip TP470 and Dell Inspiron 15 7000 2 in 1 starting today. These are the first devices to leverage 11th Gen Intel Core mobile processors, Intel Iris Xe MAX graphics and Intel Deep Link technology.