With such high 250W TDP, it was a given that the Intel Core i9-10900K would run hot. However, a test by a Weibo user indicates that even high-end liquid-cooling setups are unable to properly cool Intel’s 5.3 GHz flagship Comet Lake S CPU. The user ran AIDA64’s FPU workload together with FurMark for 100 percent CPU utilization during the benchmark. This is a pretty extreme usage scenario, but keep in mind that they’re using a 240mm AIO liquid cooling setup. Results were much poorer as even the stock 4.8 GHz all-core turbo resulted in temps as high as 93 degrees. Comparable processors like the AMD Ryzen 9 3950X (which has 6 more physical cores and 12 more threads) under similar cooling, even when overclocked delivers sub-80 degree temps. Intel is keen to promote its i9-10900K in particular, as the fastest gaming CPUs on the market. However, it appears that users will have to invest a good amount in cooling this processor to get the most out of them. AMD’s frugal 7nm chips, on the other hand, deliver over twice the performance per watt, while not being a heat machine. 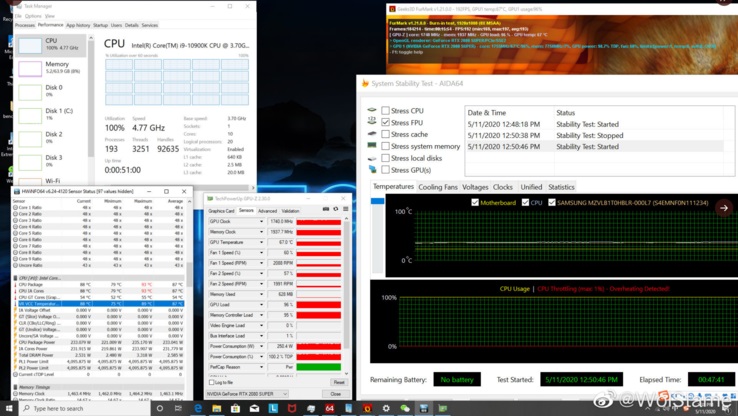