Tum Apisak discovered AMD Ryzen 9 3900XT being tested on Geekbench 5.1 combined with a Gigabyte X570 Aorus Master board. The upcoming processor recorded a single-core score of 1,324 points and a multi-core score of 10,945 points. As we can be seen below, the 10-core Comet Lake which has the TDP advantage leads in the single-core test, though Ryzen 9 3900XT isn’t far behind. You would expect an AMD processor, to lead in the multi-core test but it is not a Zen 2 part that takes the lead in this benchmark. It is the 10-core i9-10900K that has the highest score here, while the Ryzen 9 3900XT has to settle for second place in this particular comparison. Ryzen 9 3900XT has recorded the maximum frequency of the 4.57 GHz on Geekbench 5.1, so there is still a little bit more juice to be squeezed out there. 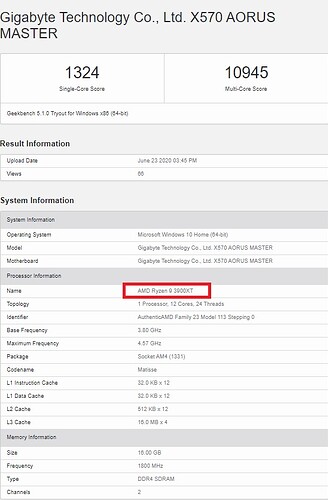