AMD’s Big Navi Radeon RX 6000 series graphics cards could potentially be unveiled tomorrow as hinted in a tweet by Frank Azor. Frank who’s the Chief Architect of Gaming Solutions & Marketing over at AMD says that the sun comes out tomorrow so you got to hang on tomorrow which might be a cryptic way of saying that everyone holding on for Big Navi from AMD shouldn’t have to wait much longer. After the launch of the Ampere GeForce RTX 30 series from NVIDIA, AMD has become more active, teasing what could potentially be its next-generation graphics cards which aim the enthusiast segment first. The AMD RDNA 2 based Radeon RX Navi 2x graphics card family is leaked to disrupt the 4K gaming segment similar to how Ryzen disrupted the entire CPU landscape. That’s a pretty bold claim from AMD themselves but leaks and rumors are suggesting that this might be the case for AMD’s next-generation Radeon RX graphics cards. AMD unveiled that it’s RDNA 2 GPUs will deliver a similar performance jump over the first-gen RDNA GPUs like Zen 2 delivered over Zen 1. The first RDNA GPUs delivered a massive 50% increase in performance per watt over GCN architecture and RDNA 2 GPUs are expected to do the same over RDNA 1, delivering another 50% increase in performance per watt. If the claims from AMD come true, then it would be quite interesting to see the future of the GPU market. 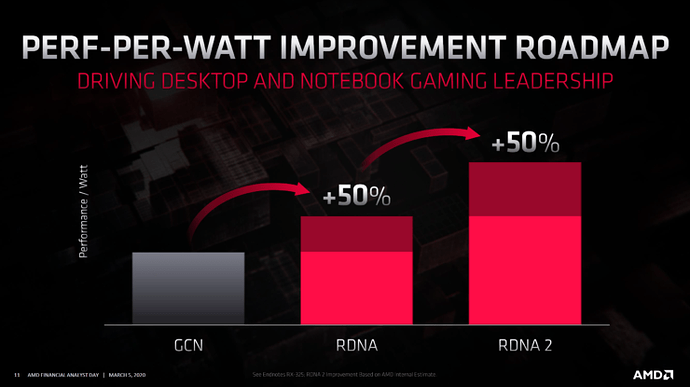 No, the reveals are postponed and amd has confirmed that the radeon 6000 will be revealed on oct 28. check the following link for more details:

Maybe hold off just a bit longer before upgrading your PC.

Thanks for the input member @Amanz